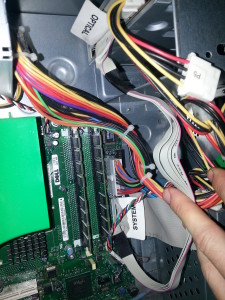 I have an old Dell Optiplex 170L Desktop Computer that I am trying to refurbish and I ran into a big problem getting it to recognize the CD Rom drive so that I could boot to CD, to install Microsoft Windows. BIOS would not recognize the CD Rom Drive and neither would Windows. I tried multiple things including swapping out IDE cables, swapping out CD Rom Drives, switching which IDE input on the motherboard I plug it into and nothing would make the Dell BIOS recognize the drive. If you have a Dell Optiplex with No CD Rom showing, this is how to make the CD Rom start working.

I did a lot of research, to try to find a solution but this was another topic that is not well documented online so it’s time for another Technology Tip!

These forum posts recommended to try the various troubleshooting steps that I had already attempted such as swapping out IDE cables, Master or Slave IDE designation and setting the CD Rom drive jumper mode to Cable Select. It would make sense that Cable Select would work, assuming you have the CD Rom drive assigned correctly within the Dell BIOS but in my case, my Dell Optiplex 170L could not recognize or boot to my CD Rom Drive.

These old computers that use IDE, which allow a designation of Master or Slave based on which part of the IDE cable you plug them into, are more complicated than the new SATA connection for disk drives. Instead of being able to just plug in the drive connector cable and go, you have to worry about compatibility issues with the BIOS, the drive, the IDE cable you are using and your motherboard/system. Further complicating the situation is the jumper settings on the drives which allow you to choose between Master (MA), Slave (SL) and Cable Select (CS). In theory, you could just set your drives to Cable Select and as long as you have them plugged into the correct IDE cable, you are good to go. But, in the case of these older systems like the Dell Optiplex Series including the Dell Optiplex 170L, this does not seem to work.

How To Fix CD Rom Not Recognized on Dell Optiplex 170L

I was starting to think that I had a bad IDE port on my motherboard but after swapping the hard drive to the secondary IDE bus and still being able to boot to the hard drive, that notion was ruled out. The problem that caused my Dell Optiplex to not recognize my CD Drive was an incorrect or incompatible jumper setting. – Read More about IDE Drive Jumper Settings

To Fix CD Rom Not Recognized Problem on Dell Optiplex:

Make sure to set your IDE CD Rom Drive Jumper Setting to Master and plug the drive in by using the Master connector on an IDE cable that is plugged into the Secondary IDE Bus on your Dell Optiplex Motherboard. It may not be important to have it plugged into the secondary IDE port on the motherboard (which is on the left and colored white) but I always like to have my Hard Drive on the primary IDE port and my Optical Drive on secondary, as you will primarily be booting to hard drive.

It is possible that you could set the CD Rom Jumper to Slave and use the Slave connector on your IDE cable but I have not tested that and for me, using the Master jumper setting, with the CD Rom on its own IDE cable, plugged into the secondary IDE Bus port on the motherboard, was the ticket! In my situation, I am using an IDE cable that has only one connector but if you use one with Master and Slave, make sure to use the connector that is farther away and labeled “Master” or “Primary”. Another possible solution would be to buy a SATA CD Rom Drive and plug it into the Dell Optiplex’s SATA port. This would probably work as well since the SATA interface is not as picky and fraught with compatibility and configuration issues.

I tried so many troubleshooting steps to finally get to this solution and wanted to share it so that other people with a similar problem could save themselves some time. I don’t know why the Dell Optiplex Desktop Computers are so picky about recognizing the CD Rom drives but at least there is a way to get it to work. There have probably been a lot of people who have gone out and bought a new CD Rom drive only to have the same issue. The BIOS is very limited on this system and even after updating it to the latest version (A09), it still had a very limited feature set and did not want to recognize my CD Rom without everything being setup just right.

Dell Optiplex CD Rom Not Recognized Problem  has been FIXED!

This site uses Akismet to reduce spam. Learn how your comment data is processed.